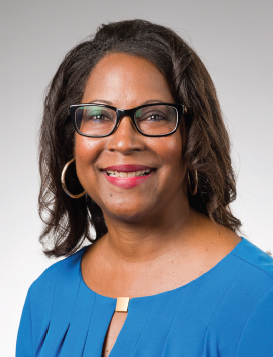 Washtenaw Community College’s pharmacy technician program students are more in-demand than ever before.

That’s because pharmacy technicians will be required to be licensed by the State of Michigan in order to work in a pharmacy as of June 30 this year. Currently, technicians can work with just on-the-job training. “Employers we haven’t worked with before, such as Meijer, Wal-Mart and Rite-Aid, are calling me, looking for licensed technicians,” said Dr. Kiela Samuels, who is the chair of the WCC pharmacy technician program and also an adjunct professor at the University of Michigan College of Pharmacy.

WCC’s program has been certified by the American Society of Health-System Pharmacists since 1998, and it prepares graduates for the Pharmacy Technician Certification Exam (PTCE).

A unique feature of the program is its partnerships. Most of the pharmacy technician students complete 320 hours of on-the-job training at local hospitals, including St. Joseph’s, U-M and Veterans Affairs. “Their training serves as an extended interview, and that’s where students get jobs,” Dr. Samuels said. “The U-M Department of Pharmacy, for example, usually hires 6-8 students right out of WCC’s program each year. It’s amazing!”

Students who graduate from the program are well-prepared to take the PTCE, meaning they are able to work with their license not only in Michigan, but at pharmacies across the country.

Students also benefit from the mentorship and instruction of U-M doctoral pharmacy students. The graduate students are allowed to lead some lectures with Samuels’ guidance, and they can also mentor WCC students who are interested in the further schooling required to become licensed pharmacists.

The instruction of Dr. Samuels herself is also a notable benefit of the program. “Dr. Samuels has developed a strong reputation in the community, and she’s a huge advocate for pharmacy technicians in the area,” said Kristin Good, dean of math and natural sciences.

Dr. Samuels was awarded the first American Association of Colleges of Pharmacy Preceptor Recognition Award in 2014. She also received U-M’s Preceptor of the Year Award in 2009.

She is the co-owner and vice president of clinical operations at THE Pharmacy in Ypsilanti, founded in 2007, and she works as a part-time immunotherapy pharmacist at U-M Hospital.

Those interested in the pharmacy technician program may contact Dr. Kiela Samules at ksamules@wccnet.edu or Health Programs Coordinator Susan Traves at stravis@wccnet.edu.