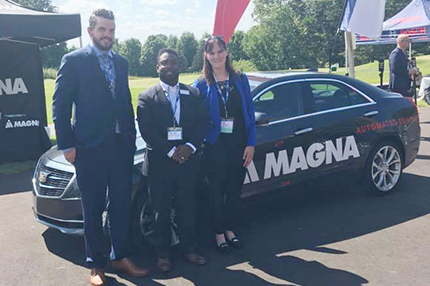 Two Washtenaw Community College students received a rare opportunity to network with, and learn from, automotive industry executives and leaders from the worlds of finance, labor, government and academia earlier this month.

WCC faculty selected students Jerry Allen, 28, and Kali Wealch, 20, to represent the college at the Center for Automotive Research’s (CAR) Management Briefing Seminars, held July 31 to August 3 in Traverse City. More than 900 attendees from over 400 companies gathered at the Grand Traverse Resort to attend high-level conference sessions on manufacturing, connected and automated vehicles, sales and production forecasts, and more.

Allen, a Redford native, is pursuing an associate degree in Occupational Education at WCC. He plans to study automotive management at Ferris State University and would one day like to return to WCC as an Automotive Services instructor.

Welch, from Whitmore Lake, has earned an Occupational Education degree from WCC and is currently pursuing a second associate degree in the Powertrain Development Technician program. She hopes to run dynamometers in a lab, or contribute to powertrain development in some way, for an automotive manufacturer.

We asked both students to take a moment to share some thoughts on their trip to Traverse City:

Q. What were your overall impressions of the CAR Management Briefing Seminars?

JA: CAR MBS was a great experience! An insight into the future of the automotive world through the industry leaders is what I took from the event. They allowed me to better understand where it is we have been and where we are headed. The next 10 to 25 years will be a major changing point for the automobile. There are so many new components to bring the driver experience to the next level, essentially connecting the vehicle and occupant as one.

KW: To hear from major players in the automotive industry was actually mind-changing. I used to be worried and scared of autonomous cars, but now I feel more comfortable after seeing the technology myself and getting more in-depth information. … The casual networking events were a nice chance to expand on conversations from the formal events with these executives. … It was just exciting to see who sat down next to you at breakfast. Just through sitting at breakfast and the casual networking events, I made quite a few connections.

Q. How did it feel to be a student representative attending an event full of executive management?

JA: Attending events with highly educated and successful people is nothing new for me, but the feeling of this event was different. … Many of the representatives who attended the event were interested (in students as potential) future employees, but they were also willing to listen to ideas we all had. This gave the impression that they were looking to us to really see where the future is going to take this industry.

KW: To be offered this opportunity by the college and my instructors was a real honor. To know they have the confidence in me and my career path to allow me to network with executives that could be my manager one day is just a great feeling and experience.

Q. What were you most impressed with?

JA: I think the most impressive part of the conference was the ease of networking, the opportunity to talk to people who have been successful in various areas throughout the automotive and supplier industries.

KW: The whole event. Even though it was a business event, the CAR staff made sure to make the time enjoyable and easy to network. I was also impressed that they were able to display the autonomous technology and that I had a chance to ride in level 2 and level 3 autonomous vehicles.

Q. What was your primary takeaway or the best thing you learned?

JA: The automotive industry is changing at a much faster rate than what any of us initially thought. This is going to be the next big boom in technology, and the future advancements at this point are unimaginable. The best thing I learned is acknowledging what is coming in the future and the technology we are going to have to prepare to integrate into our daily lives.

KW: The best thing I learned at the conference was how the automotive industry will need to adapt to become mobility companies, as well as selling cars, because of the rise in ride sharing and young people not wanting to drive. Also, all the plans for autonomy, what’s going on now and how it will evolve in the future.